The Church of St. Andrew, received the additional name of St. Mary, patron of the chantry after the 16th century. It was in the 19th century that it was believed to bear the name of St. Barnabas, on whose day the village feast was held. 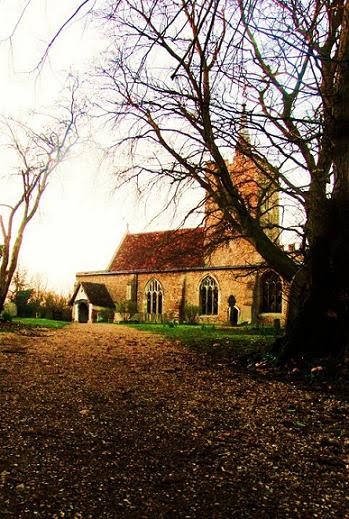 The Church consists of a chancel with south chapel, central tower and nave with a south isle and porch, and is built of field stones of ashlar dressings, until stripped in 1910, the walls were plastered externally. The Norman Church comprises of only a nave, central tower and chancel. The thick north wall of the nave survives, with one round headed window,and the lower stage of the tower with four such windows. The south window is surrounded by linear carvings of grotesque creatures. In the 13th century the chancel was rebuilt, with a row of lancets, mostly later blocked, in its north wall, a south isle, divided from its nave by a three bay arcade was added alongside the nave and tower.

The nave walls were heightened, and its roof raised, bringing a tower window inside the church. Square openings over the nave arcade may represent clerestory windows of that period. In 1352 the high alter was reconsecrated and proberly after re modelling two decorated windows were inserted in the north wall of the nave. The west window of the same period, formally contained the arms of waterville.

In the early 15th century, new windows were inserted in the south isle, and the tower was given new arches to the nave and chancel and a taller belfry stage. The tower bore the arms of scales and allegedly Beauchamp. Its new belfry windows cut off the tops of earlier ones. It is surmounted by a short leaded spire, which was missing in the early 19th century. By 1500 a two bay chapel had been built, south of the chancel, the original screens between chancel and chapel survive. The east windows are proberly early 16th century, that of the chancel once containing the arms of Tilney impaling playters. Bequests for glazing the church were made in 1521

After the reformation of the south chapel, (1665) the lords chapel fell into despair. In 1638 the church was overcrowded with prominent parishioner’s pews. In 1783 many windows were decaying and blocked with plaster,their mullions gone. In 1823 the church contained reserved pews for 87, benches for 117 and a large pew for 90 children at the west end. The high pew except for the manorial pew under the tower, which survived until 1913 were swept away when the interior was cleaned and later restored between 1875 and 1882. The roofs and external fabric was were throughly restored between 1905 and 1922.