William Westley (founder of our village school) William Westley was the youngest son of Robert and Elizabeth Westley of Whittlesford, He married Lucy, who bore him seven children who all died in their infancy and at William’s death in 1723, Lucy was expecting another child who also died in it’s infancy.

On 13th July, at the relatively early age of 38, William died. His wife paid for the memorial monument to be erected on the north wall of St. Mary’s and St. Andrew’s parish church in Whittlesford. Lucy herself died in 1737 and stones to William and Lucy now lie on the floor of the nave in the parish church.

William Westley left in his will an endowment for the provision of schooling for poor children after Lucy’s death, and so the first established school was a result of his foresight, generosity and charity.

The Parish had no established school until the 18th century, and after Westley’s widow died in 1737 his land was conveyed to trustees. In 1741 the trustees hired the Guildhall as a schoolroom, no scheme was approved until 1760, when the last surviving trustee’s heir tried to appropiate the income. Ebenezer Hollick (d.1792) had recovered the estate in chancery by 1768, and in 1771 a scheme was made in accordance with Westley’s will.

His endowment produced £45 a year, this paid for the hire of the guildhall as a school room, and for books, clothes and footwear. The Guildhall was to be converted into a poor house at the end of the 18th century, which meant the Children were once again without a school.

By the turn of the 19th century the boys and girls went to school in seperate cottages, until a Ruinous shed, once a Blacksmith’s shop was then used as a school room. From 1818 – 1825 it was recorded that 30 boys and 30 girls attended school, the boys were taught reading writing and arithmetic and the girls sewing and knitting. By 1846 numbers rose to 40 boys and 42 girls.

It was becoming quite clear that the children of the village needed a school.
P.C.M. Haskin who was the vicar in the village from 1844 desperatly wanted to reform the charity school, but was frustrated by the very aged trustee Ebenezer Hollick – ‘an old infidel chartist’

It was in 1854 that P.C.M.Haskin finally sought a scheme by which the management freed the detailed prescriptions of Westley’s will, this was transferred to the church warden and subscribers.
It was under this scheme, that funds from Westley’s endowment (and later supplemented by a parliamentary grant) were used to buy a site and build a school house. Completed and opened in 1859.

The school, (now the Whittlesford gallery), and now referred to as the old school, was built in 1859 on land leased by the then Lady of the manor, Anne Blunket Hollick. The building was made from local cambridge bricks and cost around £800. The first appointee to the new school was the headmistress Mrs M Southern in November 1859, and the first intake of pupils at the school was 72 boys and 84 girls. By 1860 it staffed four, one of which was a certified teacher.

The above photograph of The Old School, is how it looks today. 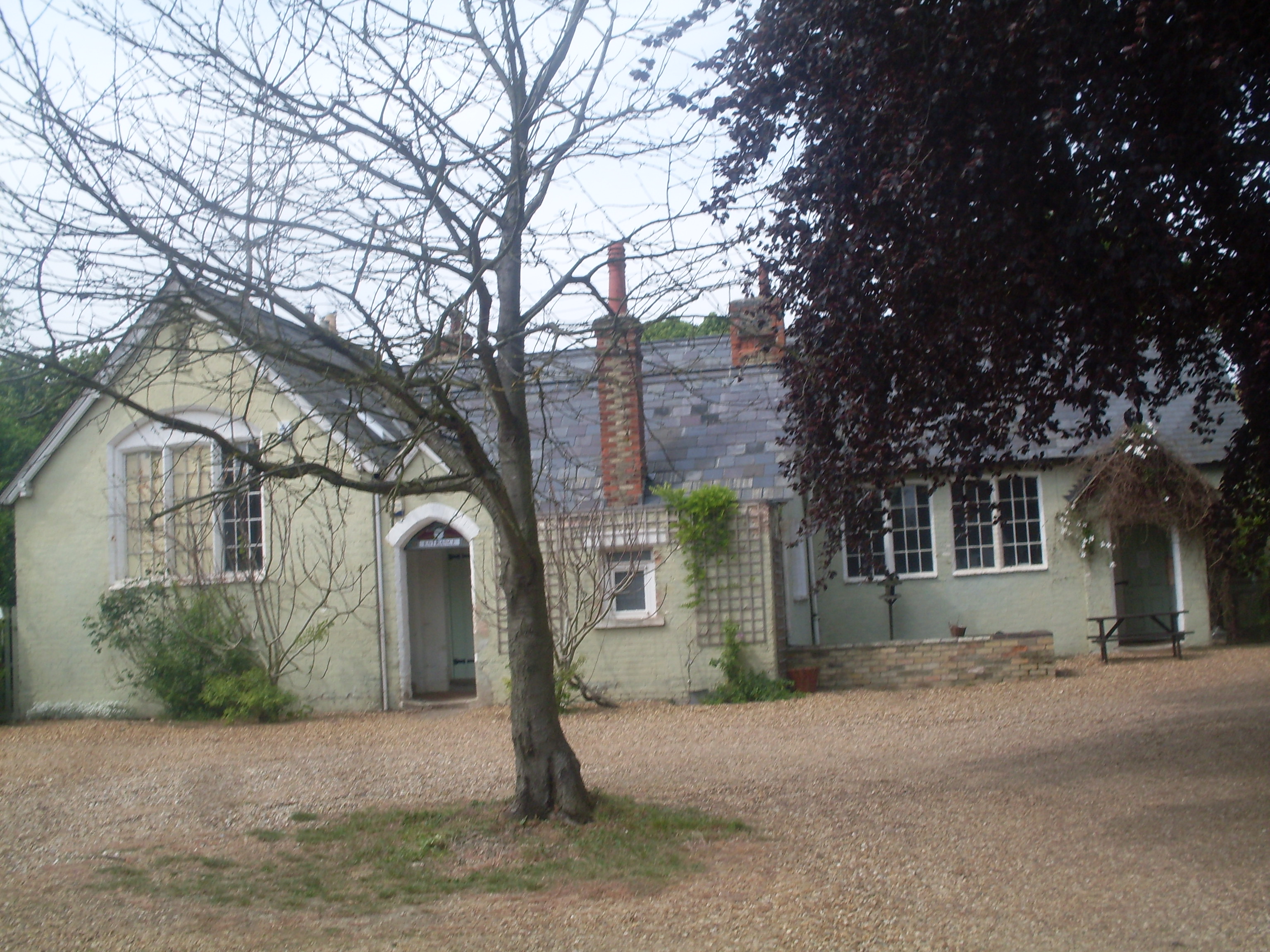 In 1871 the government began to contribute an annual amount, a new cloakroom, a new classroom and heating apparatus were added in 1884, following an appeal for donations, including two from the great Eastern Railway for £10.

This memorial plaque lays in the parish church to remember William Mosley – Headmaster of the village school 1885 – 1922. 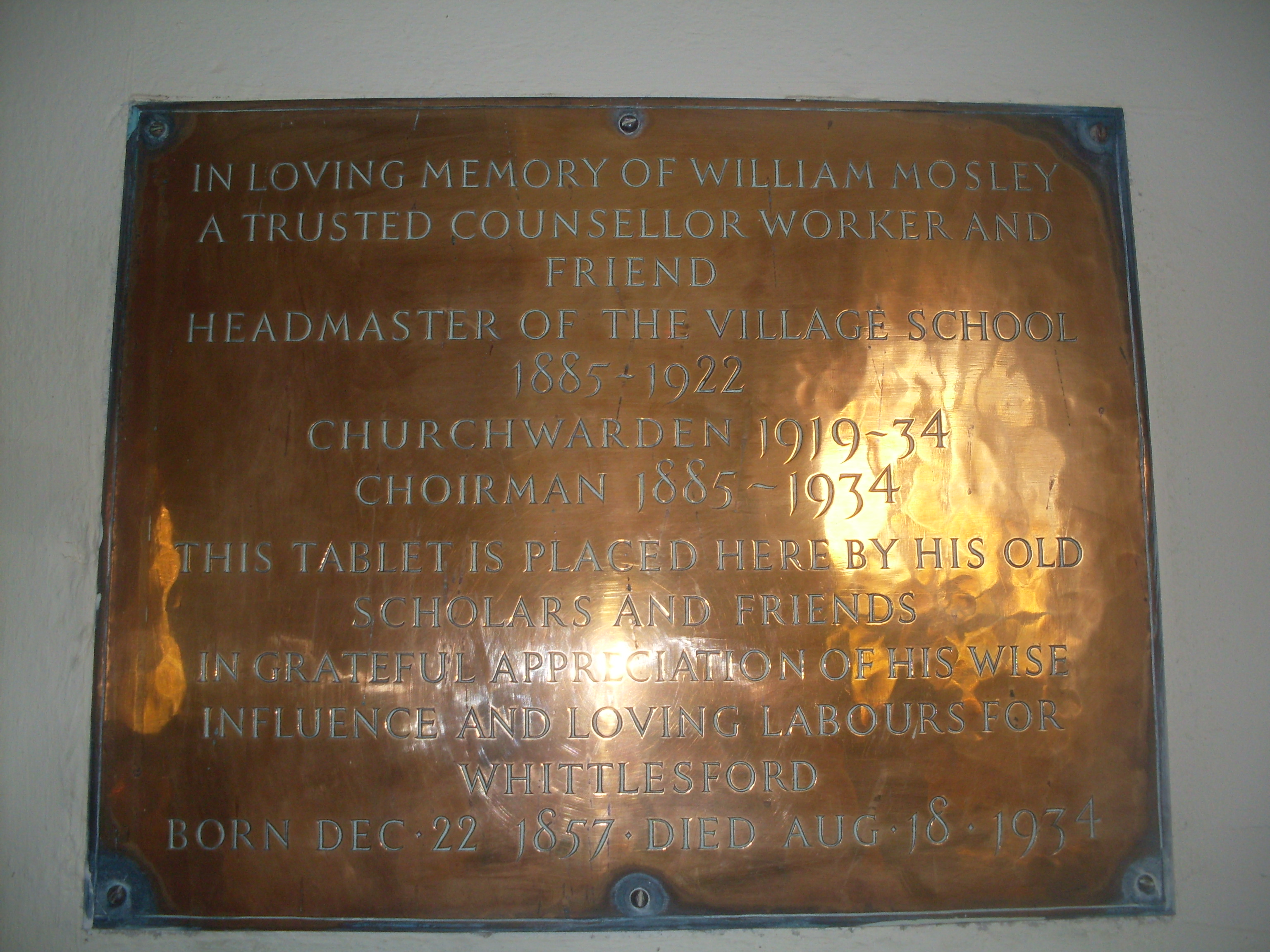 In 1885 Mr William Mosley was appointed as headmaster (1885 – 1922) and it was Mosley who took the school from being below average to one of the principal schools in the county, with the 1912-13 class winning 11 county scholarships out of only 100, as well as many other academic achievements being recorded during this period. The new school was built and opened in 1973, it was officially opened by Sir Hamilton Kerr on the chosen date of 13th July, this being the date that William Westley died, and this date is still celebrated even today as William Westley Day.
On this day the children of the school celebrated and remembered William Westley, by coming together and sharing a picnic on The Lawn.

In 2007 a new classroom was built to give the school seven separate classrooms, one being for each school year from the reception class up to year 6.

For further information on William Westley school, please visit their website at
www.williamwestley.org.uk