Have you ever wondered why our village sign says the words…. STICK TO THE TROTHE?

A recently asked question by a parishioner, prompted me to learn the history behind the village sign.

It was a question that I could not answer, so I decided to do some research on it, and thanks to Ann Strange, and her late husband, Keith Strange’s numerous village artifacts, this is what we found…… 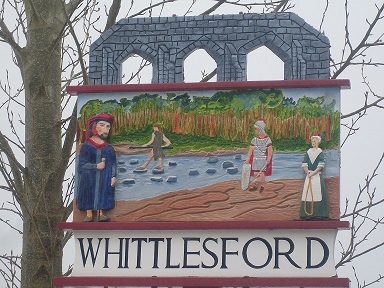 Situated on the east side of North Road, opposite the Manor House, facing traffic approaching from Cambridge.

The Centre Panel – The important river crossing, one of several in the immediate area used by travellers from the very early times to the present.
Archaeological finds confirm that the Icknield Way was used by Stone Age man and the particular crossing near the Moat House has yielded Roman artifacts.

The Medieval Bridge – Is Intended to emphasise Whittlesford’s position on the River cam during later centuries.

The left-hand figure – Shows Nicholas Swallow, farmer and benefactor of the village, whose name is commemorated in the village charity along with others, including Lettice Martin, the benefactress from Chishill, who gave money for the aged and poor of surrounding parishes. She is now remembered in the housing estate on the Lawn ….. The Lettice Martin Croft.

The right-hand figure – Shows a Charity Schoolgirl and is intended to remind villagers of the gift of William Westley, the Cambridge grocer whose lands provided funds for the schooling of Whittlesford Children.

Below the sign – The village’s association with Roger Ascham, (tutor to the first Queen Elizabeth), who married Margaret Howe of the parish.
It is recalled by a quotation from his writings – Stick to the Trothe.

The Shield – Carries a Maunch – The heraldic emblem of a sleeve worn by ladies in the reign of Henry 1, having a long lappet hanging from the cuff, often awarded as a knightly ”favour”. This forms part of the armorial bearing of the present Lord of the Manor.

This sign was designed by Tony Carter, Resident of Whittlesford, carved by his father, Harry Carter – famous Norfolk sign carver, and then unveiled by the third generation, David Carter. David still maintains the sign to this day and has carved a few signs of his own in the other near by villages of Pampisford and Thriplow.

I hope the next time you pass the village sign, you will look up, and remember the history behind it.